APRIL 21, 2017 – CAYUGA, ON – With the Dragway at Toronto Motorsports Park set to open for the 2017 season this Sunday, track personnel are proud to announce that work has taken place over the past two weeks to improve starting line traction. This weekend’s Test & Tune session, from 11:00 AM – 4:00 PM, will give competitors their first look at the reworked surface. 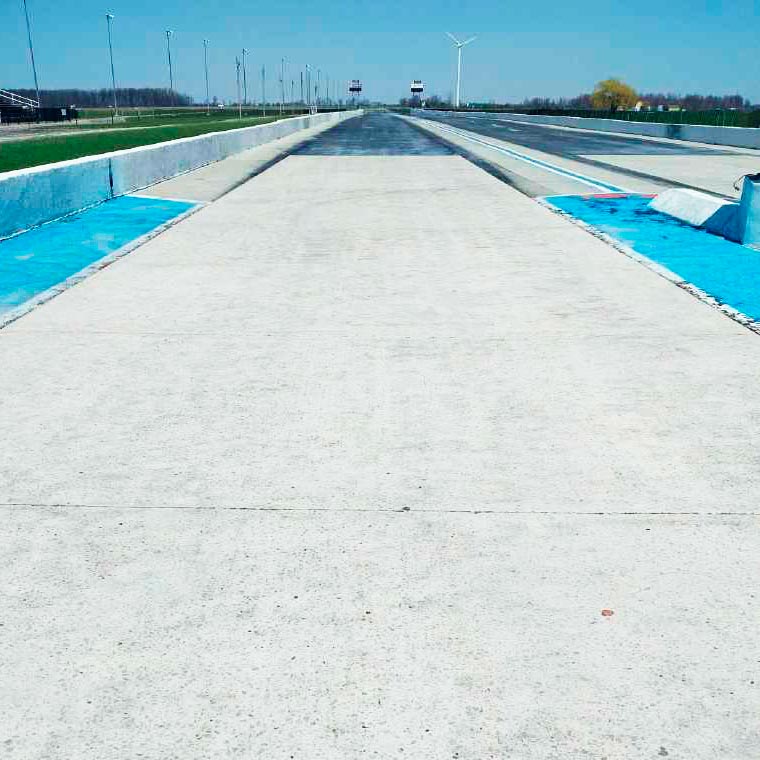 The work, which was concentrated in the starting line area of the 1320 foot racing surface, is intended to create a stronger bond between the concrete and the glue/rubber that is applied during track preparation. The process, which involved wet abrasive blasting, not only removed the build-up of existing rubber and glue left behind from years of competition, but also put a mild profile on the concrete surface, which is intended to promote better adhesion during track prep. The work was performed with equipment supplied by BlastALL Equipment Rental & Supply, owned by the McIntyre Family, which sells, rents and services the Graco wet abrasive blasting equipment that was used in the process.

While the racing surface will undoubtedly require some breaking in, Dragway Track Manager Neale Armstrong is optimistic about the improvement this will make during track prep and in the long term for competitors. “We’ve had issues in the past with the glue not staying down, so this work was done with the intention of helping that bond better with the concrete surface,” stated Armstrong. “The track used to be ground, polished, washed and cleaned for national events, but in recent years had not been, so this is a major step in the right direction for improving the overall racing experience for our competitors.”

From its humble beginnings  in 1954 as a Sunday-only drag racing facility, while still operating as an active air field known as Kohler Airstrip, Toronto Motorsports Park has strategically developed into one of North America’s most prosperous motorsports entertainment venues.

Toronto Motorsports Park has a diverse facility, currently housing an NHRA sanctioned quarter-mile drag strip, a challenging and versatile three kilometre road course and a handlebar gripping motocross track. The availability to so many world-class tracks has led to the development of several track operated events, as well as high demand from third-party event organizers to rent the facility.